MetalSkin®: a bactericidal paint that sets a revolutionary standard

MetalSkin Technologies, based in Balaruc-les-Bains in the Hérault region of France, has developed a copper-based paint to eradicate bacteria, microbes, germs and viruses, particularly in the hospital environment. The TPE, winner in the “take a step ahead” category, has made work on the standard one of its spearheads in terms of innovation.

Fight against the proliferation of bacteria and microbes, using the strong antiseptic properties of copper. This is the innovation brought by MetalSkin Technologies, a small company from Hérault, France, managed by Stéphane Penari and René Belin. “Copper has been used since the Phoenicians, who covered their boats with it to prevent the proliferation of algae, explains Stéphane Penari. It’s a healthy but expensive product. “Impossible, in terms of cost and risk of theft, to deploy copper handles for all doors hospitals and hotels. Metalskin’s innovation consists of reducing copper by powder and incorporate it into resins, to produce a pigmented paint. This mixture is applied to non-porous surfaces, “with the thickness of only one coat. thick coat of paint. We just treat the potential transfer surface of the bacteria by hand,” he says. A test, carried out at the Saint-Roch clinic in Montpellier in 2013, has proven to be conclusive. Three series of patents have since been filed, in France and abroad.

A normative process is at the origin of this innovation. “In 2013, during the first tests, there was only one international standard (ISO 22196), whose protocol was far removed from real field conditions,” rewinds Stéphane Penari. And with good reason: the surface had to be wrapped in an opaque film, then placed in an oven for 24 hours under certain conditions (37 degrees, 90% humidity). “I explained to Afnor that we would have difficulty solving the scourge of nosocomial infections with such a standard! ».

In 2016, Stéphane Penati will conduct a study on the normative reference system, consulting doctors, risk prevention specialists, etc. The Afnor creates a standardization commission, bringing together various experts, such as the Anses, microbiologists or specialists in regulations and materials. “We set thresholds and methods, and determined the strains tested. The results had to speak to food manufacturers and hygienists.

To comply with this standard, a bactericidal solution must generate a division of the bacterial solution into two parts. per 100 of the number of bacteria in one hour on the treated surface, out of the 4 bacteria tested. Advantage of the standard: “At present, a quality standard is attached to an unquestionable standard. And, for its development, everyone focused on the the same objective of quality,” observes Stéphane Penari.

Towards an ISO standard?

The public health stakes are enormous. In France, 750,000 people are infected each year in hospitals, i.e. one patient in 20, and 4,500 deaths occur as a result of nosocomial infections. The NF S90-700 standard could be included in the specifications during renovation or construction work in hospitals, but also in hotels, places of continuous passage. We don’t know how many fewer deaths and infections there would be with the use of this standard,” he says. What we do know is that the bacterial contamination will be lower than if something is not up to standard. ».

MetalSkin Technologies (200,000 euros in sales) has qualified French industrialists (painters and polishers) capable of applying the product. “Our job is to license our technology, and to lobby so that our products are known, prescribed and even imposed”, explains Stéphane Penari. The MetalSkin® solution can reduce the number of bacteria by a factor of 1,000 in three minutes, which is far beyond the norm. “But I didn’t want people to say that MetalSkin® has become a standard,” smiles the CEO. A hiring phase and a fundraiser are planned for 2020, for business development and export. A first contract is signed in China for the bactericidal protection of keyboards and mice. of computers. In addition, an agreement has been concluded with an assistant to the project owner. (ISMS, Levallois-Perret), specialized in the health sector.

To read the entire article (in French), click here !

A french start-up has patented a composite material formulated with copper that could be a true revolution in the control of bacterial contaminations.

In 2014, MetalSkin® already received an innovation award. Since then, the company has imposed a reflection on the standards for bactericidal surfaces. Afnor (the agency in charge of standards) has just rethought a system that is notably obsolete: surfaces declared anti-microbial, which are indispensable in hospitals, proved to be ineffective in real situations. Stéphane Pénari, creator of MetalSkin®, has not only alerted to this issue, but also provided a solution: a specific copper-based paint known for its long-lasting bactericidal properties (copper ions puncture the membrane of the bacteria and kill it).

“Nosocomial infections represent more than 4200 deaths per year in hospitals,” explains Stéphane Pénari. They spend fortunes to avoid them. MetalSkin® slightly increases installation costs (between 10 and 20%) but for an efficiency of 99.9%”.

From door handles to faucets to keyboards computer or ramps, MetalSkin®. 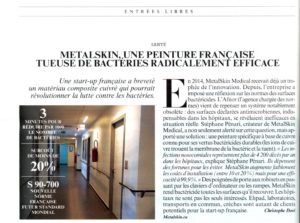 To read the PDF version of this article (in French), click here !

A new Afnor standard evaluates the effectiveness of bactericidal surfaces

PARIS, June 3, 2019 (TecHopital) – In order to strengthen the fight against nosocomial diseases in the hospital, Afnor announced at the Paris Healthcare Week that the publication of a new standard (NF S90-700) on the efficacy of biocidal surfaces.

To evaluate the effectiveness of bactericidal surfaces, until now there was only one standard, ISO 22196, based on “tests in the dark, with a long contact time (24 hours), at 35°C and 80% humidity”, “which is a far cry from the conditions of a hospital door handle,” explained Stéphane Pénari, creator of MetalSkin®*, a bactericidal surface that won an innovation prize with its product in 2014 (see box and this TecHopital dispatch).

As a result, surfaces declared as antimicrobial may prove to be totally ineffective in real conditions of use.

“There was a normative void in France,” explained François Thomassin, health project manager at Afnor (French Standards Association). The idea of this NF S90-700 standard, entitled Method for evaluating the basic bactericidal activity of a non-porous surface, is to enable the bactericidal capacities of the materials tested to be assessed under real operating conditions.

This standard was drawn up by a committee of experts after a public inquiry – i.e. a consultation open to any interested party who wishes to give its opinion and transmit proposals for improvement -. and after a feasibility study. It is “a performance-based standard, not an techniques” used, he stressed.

“The interest of having a standard is to have a common repository (French, European, global), to facilitate exchanges and interoperability,” added the project leader. A standardization committee has been formed, made up of experts and chaired by Afnor. Professor Christine Roques, hygienist of the CHU of Toulouse, was appointed chairperson of this commission.

The test is based on 4 bacterial strains: Staphylococcus aureus, Enterococcus hirae, Escherichia coli and Pseudomonas aeruginosa, “representative of problematic bacteria families”. “The test is very simple” and fast since it is speaking after 2 to 3 minutes of drying.

The standard, published at the end of April, “has received a very positive reception from hygienists,” said François Thomassin.

Applied to handles, elevator knobs, handrails, taps, access ramps, etc., the MetalSkin®* solution makes it possible to obtain the properties of copper without the disadvantages. It was a Montpellier-based start-up company that developed this copper-based resin, which makes any surface bactericidal. It is protected by patents in France, Europe and worldwide.

A clinical study, validated in 2013, proved the effectiveness of the innovation, which inhibits the growth of bacteria. The effect “is very rapid with a 3-log reduction in 3 minutes”, reports Stéphane Pénari. Bacterial reduction is expressed on a logarithmic scale in base 10. Thus, a 3-log reduction corresponds to a division by 1,000 of the number of bacteria, i.e. an efficiency of 99.9%.

Finally, the additional cost generated by the use of MetalSkin® is between 10% and 20%, according to Stéphane Pénari.

To read the full article (in French), click here !